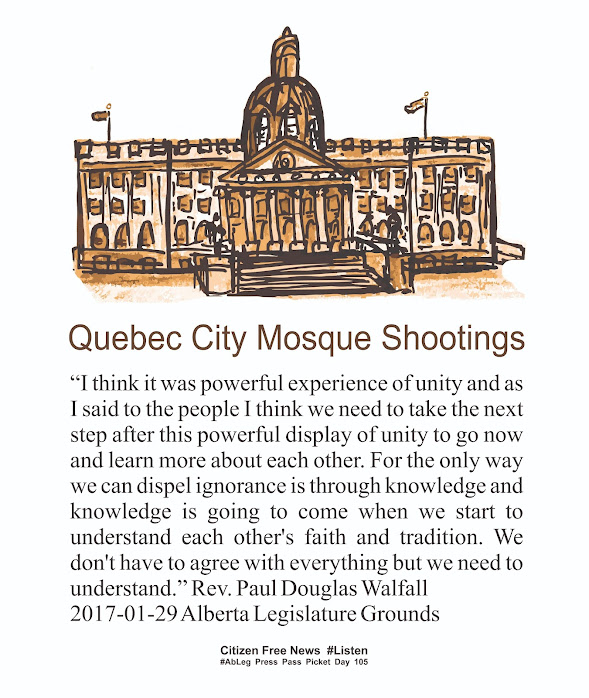 2023-01-29, Painter's notes, Quebec Mosque Shootings: Looking back to 2017-01-29, an interview with Rev. Paul Douglas Walfall, who spoke outside the Alberta Legislature by the reflection pool the night of the Quebec Mosque attack. 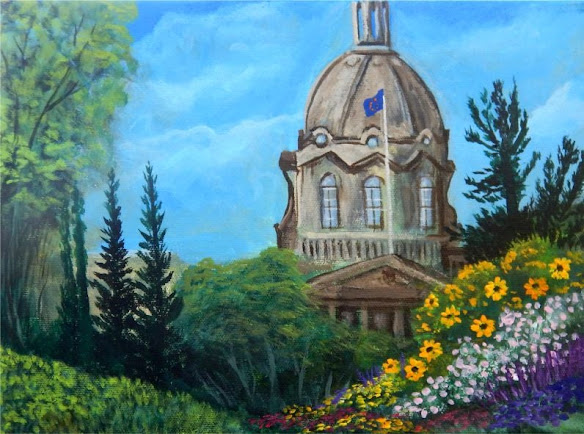 2023-01-26 Painter's notes: Looking forward to returning to the Alberta Legislature public gallery, to follow the business of the Alberta Government, Loyal Opposition, and News Media at the end of February, Black History Month. In the meantime, I'm following the business inside Edmonton City Hall. Of course I'll be wearing my art! 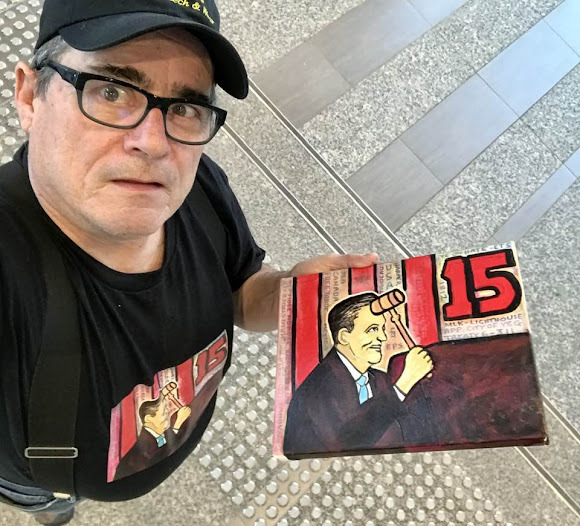 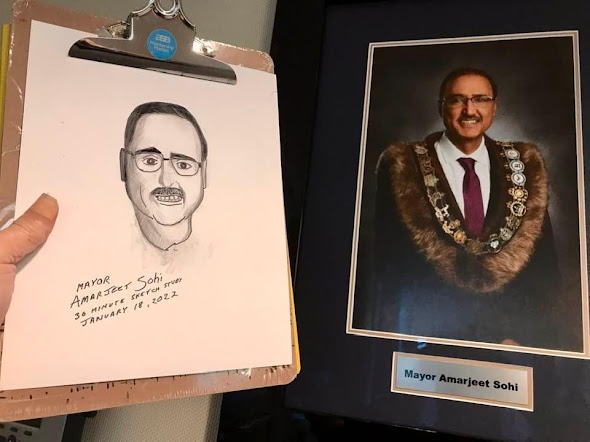 Thank you Edmonton Mayor Amarjeet Sohi, City Council, City manager, City Clerk, City administration, and all the friendly City Staff, and Security for providing the means and opportunity for the public to follow our City's democracy. I've learned much since I started to attend more meetings this year. My love & respect has grown for our City Hall's community of people it takes to run our City, thank you all! 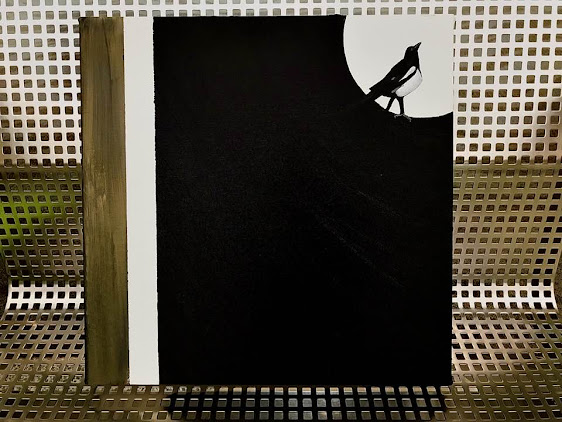 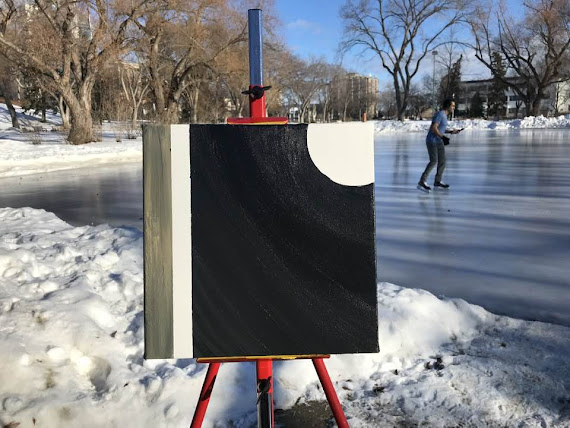 Off White, Tribute to Virgil Abloh
Day 1, adding paint next to the ice rink. 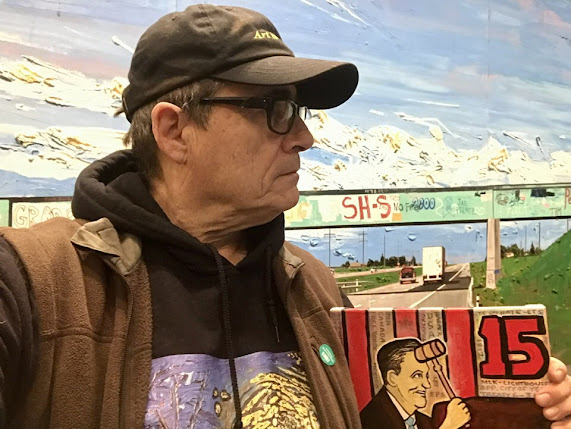 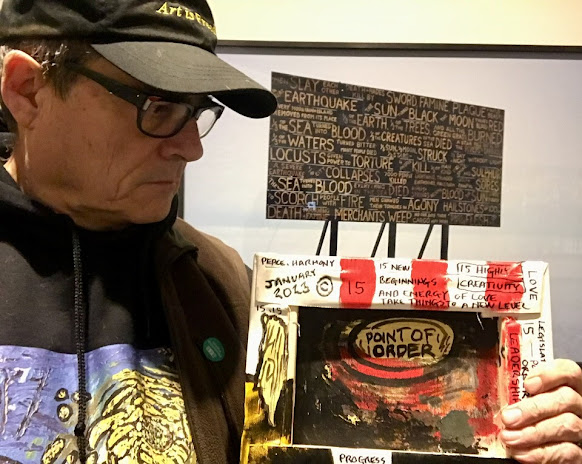 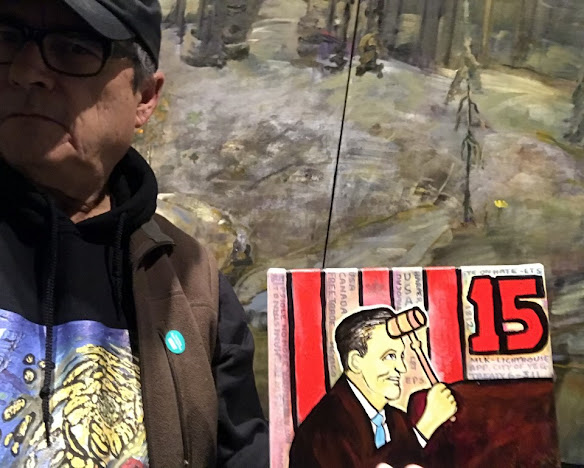 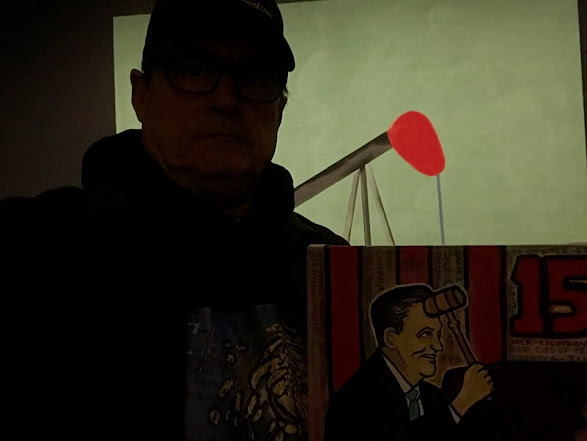 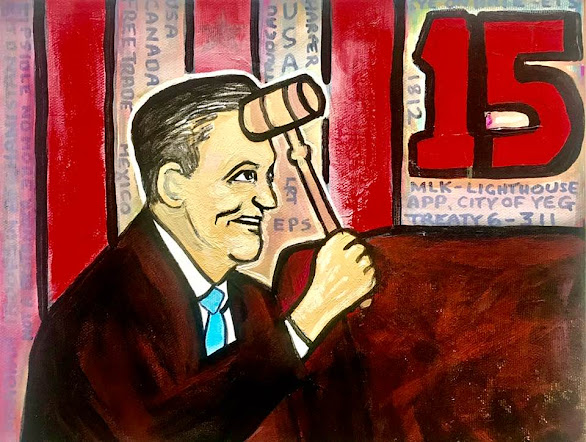 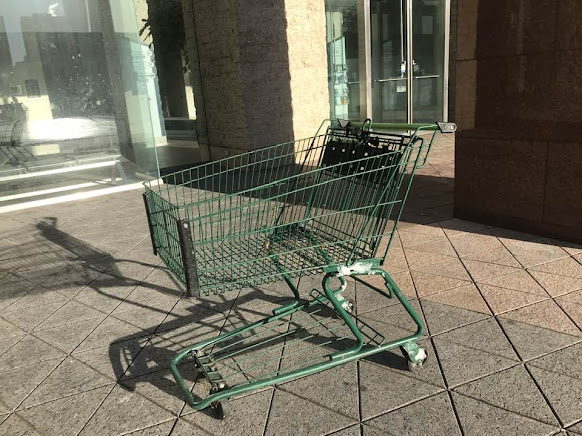 2023-01-26, Update on my grocery cart deposit to the City Hall program that I started last year. I had a meeting today with the local Save on food manager. He tells me the carts cost his company under $500 each and that security guards are not allowed to stop anybody from taking the carts once the carts have been removed from the grocery store property. This explains why I saw 2 homeless people steal carts onto 109th street, and Security watched. Carts end up in front of our building, used by the homeless and sometimes by thieves and vandals as battering rams, to break into our New Cambridge Lofts building and local businesses. I learned from the Save on food manager, the City Of Edmonton is not returning the carts to the owners. Instead, they are taking them to the dump to be crushed and recycled. As of today, I will do my part as a good neighbour and return Shoppers Drug Mart and Save on Food carts back to the stores. All other carts found from stores, not from our downtown neighbourhood will be dropped off at the City Hall for disposal. Being a senior, I can use the exercise, being a win-win for all! 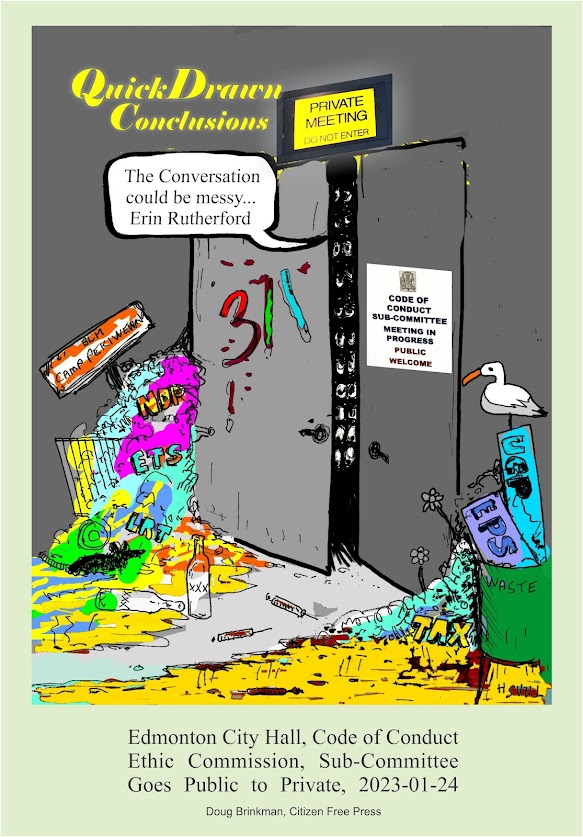 2023-01-25, Painter's notes: Today's Quickdrawn Conclusion of yesterday's Code of Conduct - Ethics Commission meeting that was open to the public, but went quickly to private after one councilor, Erin Rutherford said the conversation could get messy. I was the only public member in attendance who had to leave after 30 minutes of deliberation. Maybe next time City Coucilors can vote to kick the corporate news media trouble makers out of the room and keep us, the general public, the taxpayers, the ones who voted for your jobs and the folks like me you are suppose to work for left inside the room during the meeting. On another note of interest, according to the new Lighthouse App for Peace Officers, which will be used to determine hate symbols, the city's 311 helplines is listed as a secret code for the Klu Kluz Klan. 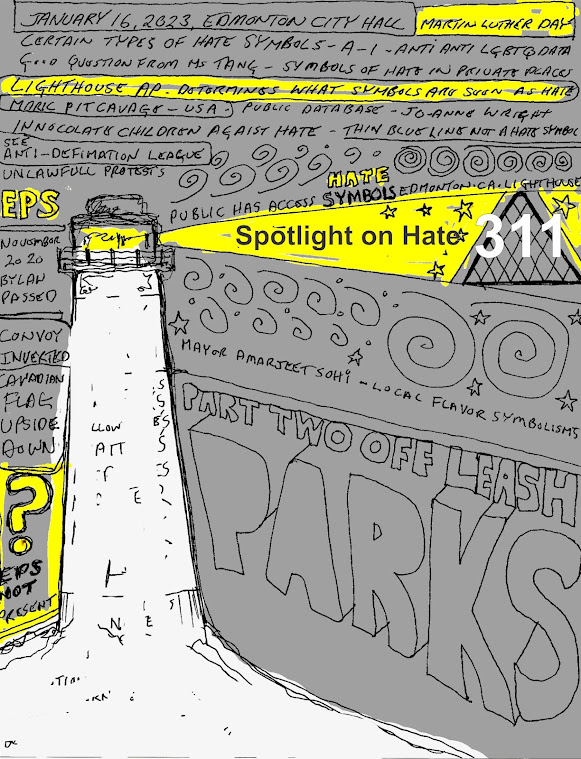 Edmonton Peace Officers to carry the app, while Mayor Sohi asked why was the Edmonton Police Service not involved participating with city Council meetings regarding the app. 311=Code number for KKK. 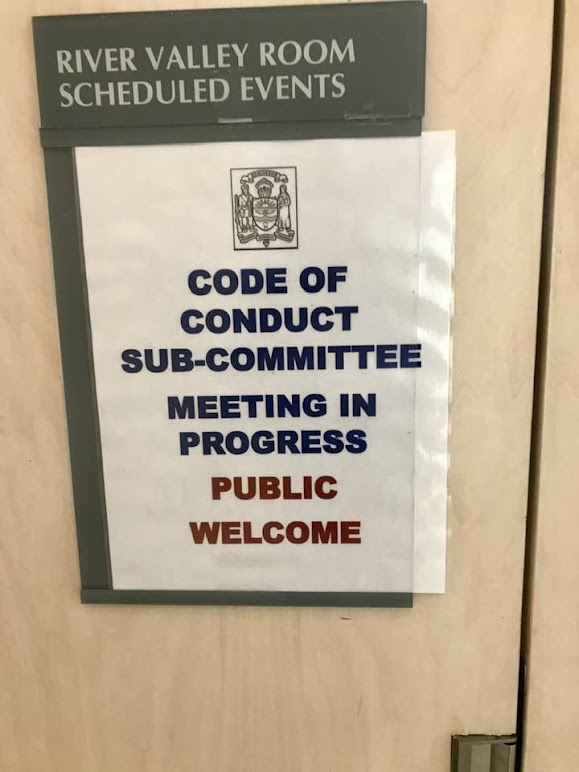 I was inside City Hall, River Valley room during a public meeting for about 30 minutes give or take before city councilor Erin Rutherford said the conversations could get messy... The City council then voted to go private. I was the only person sitting in the public gallery when I vacated the public meeting. Quickdraw Political Cartoon coming soon.

Behind Closed Doors, Closed to the Public 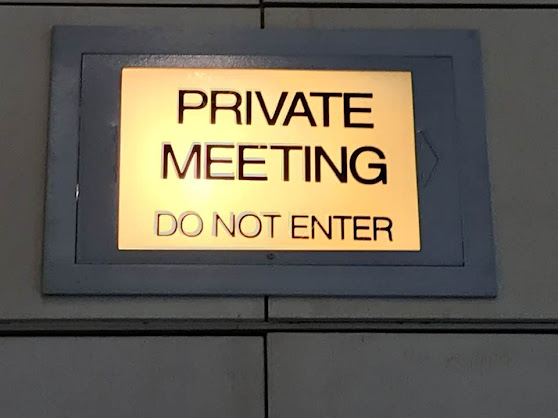 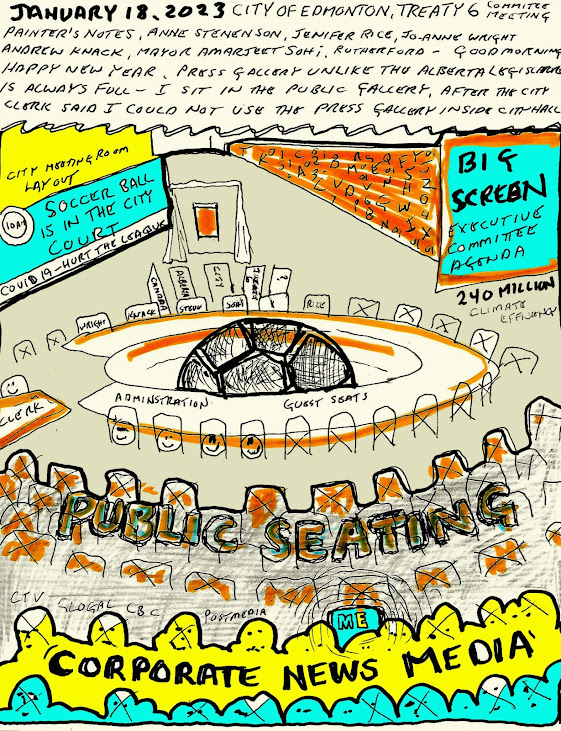 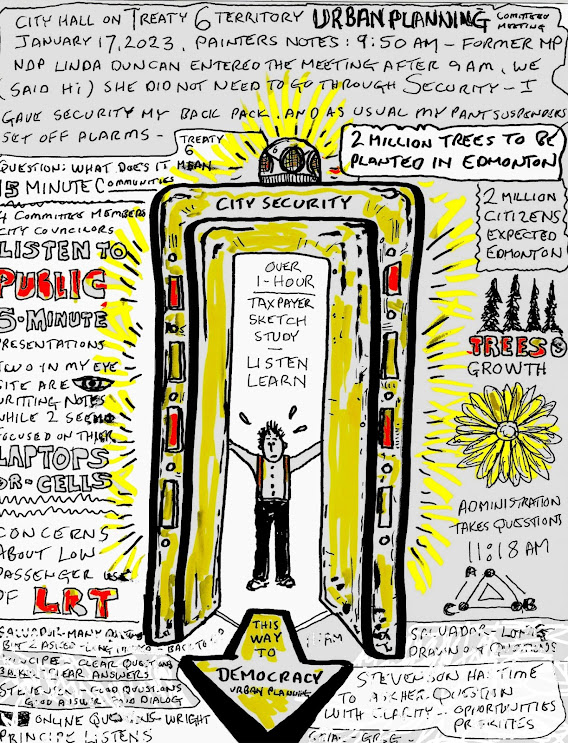 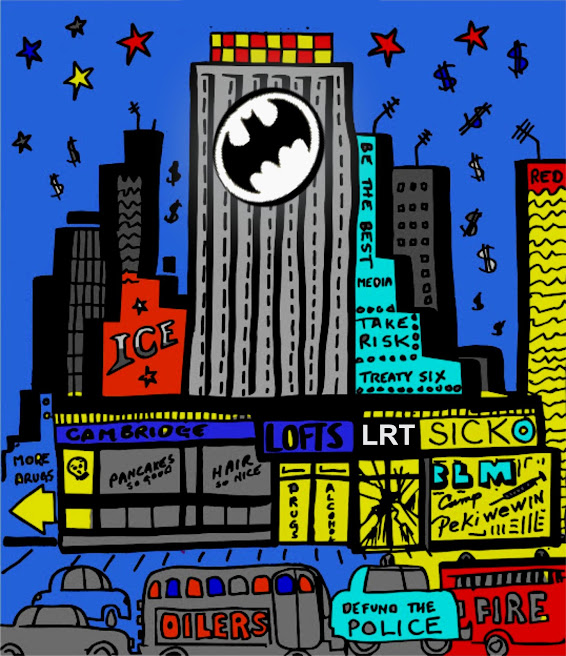 Thank you Sohi & Janz,
All Flowers Matter, in Democracy 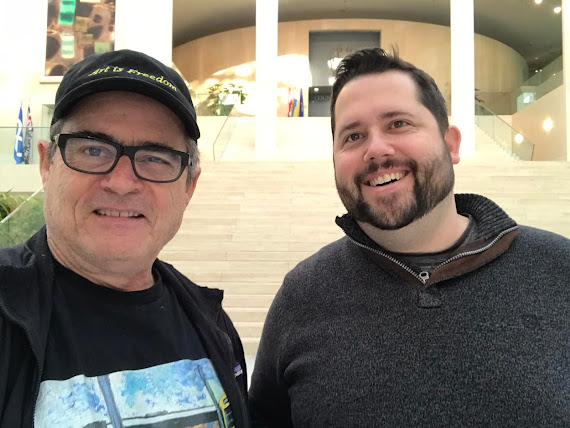 2023-01-24, Painter's notes: Honoured today to learn after a City Hall morning meeting that my 2022, Recall Mayor Amarjeet Sohi and City Councillor Janz picket sign found a new home inside Michael Janz’s office. Mr. Janz appreciates citizens' participation in getting involved at City Hall. I retired my picket sign last September to the Mayor’s office, telling Mayor Sohi there were no hard feelings about my picket as it was only a test run for Alberta's Government's newly enacted Bill 52, The Recall Act, to survey Edmonton's reactions to the City council voting to defund the police 10.5 million in 2021. 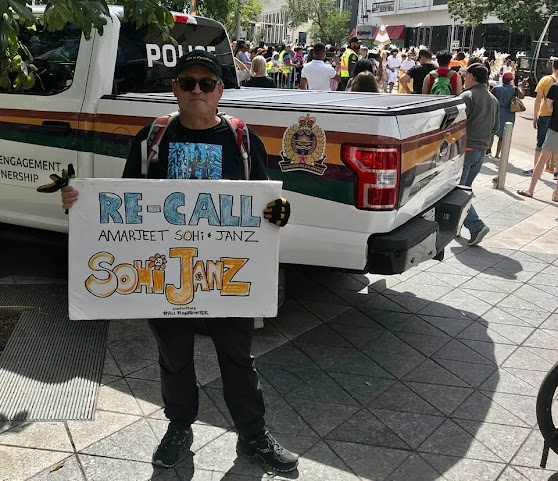 2023-01-24, Painter's notes: Edmontonians strongly support the Edmonton Police Service judging from the reactions I got to my 2022, January-September Fund The Police, Recall Sohi/Janz test picket observed at several key locations downtown and in Old Strathcona. My picket was suspended with respect during Black History Month in February 2022. I plan to celebrate Black History Month this February 2023 with paintings and pickets. 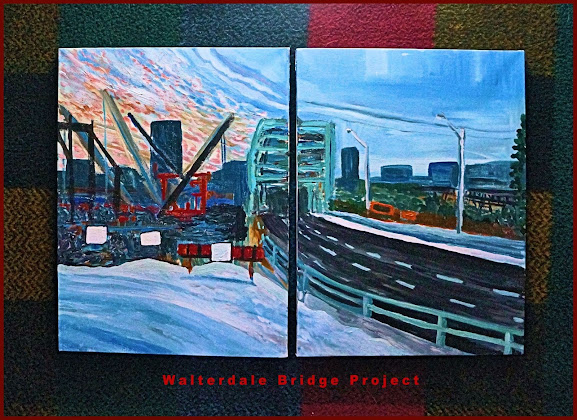 2023-01-24, Painter's notes, looking back to January 24, 2015: Walterdale Bridge Art Project, This painting I started on location by the construction site of the new bridge, and was completed today in front of City Hall. 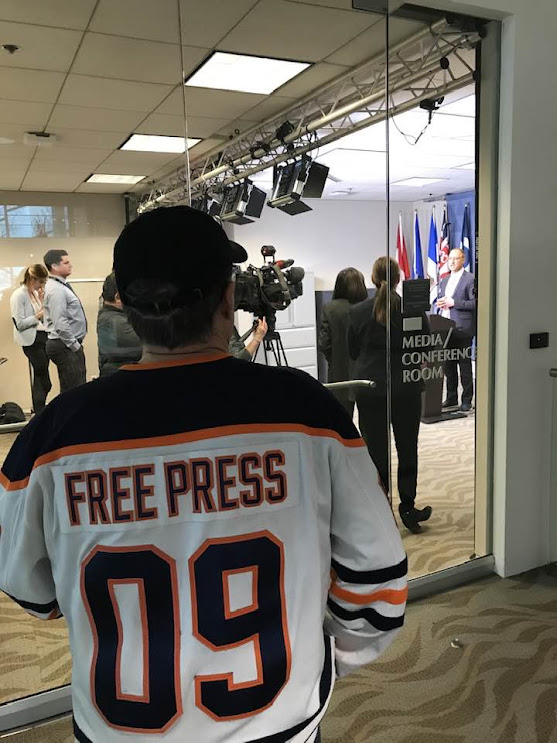 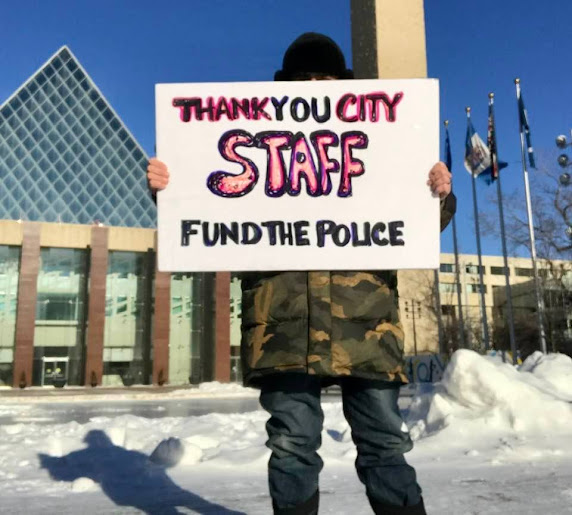 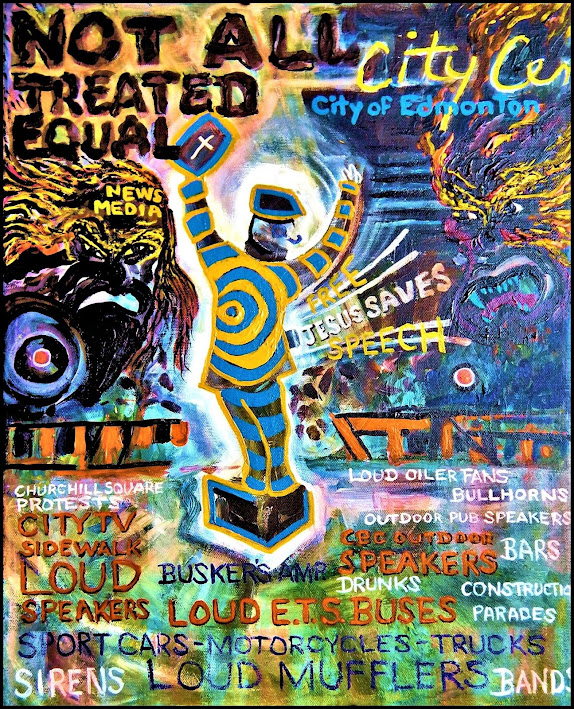 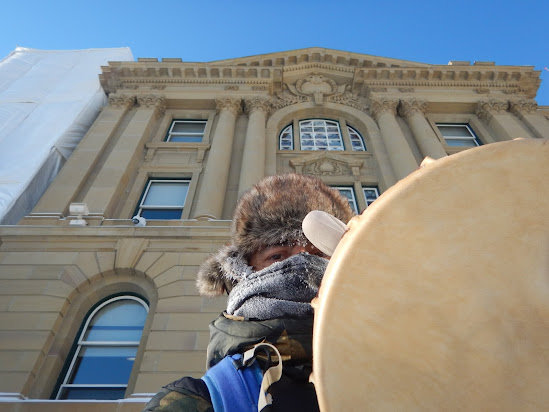