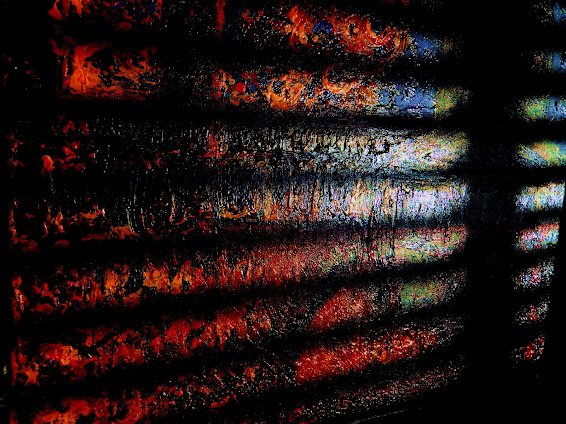 Abstracts of Light and Shadows 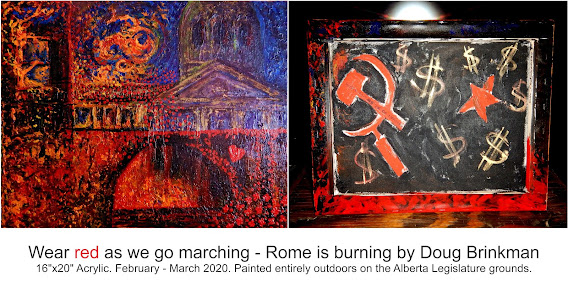 2022-10-03 Painter's notes: Jason Kenney was a man of few words whenever we spoke to each other and they were always friendly words exchanged. My favorite was by the Alberta Legislature front door steps at the start of COVID19 when he spoke behind me without missing a step and said "hi Doug, stay safe" just as I was taking a photo of my painting 2020, Wear RED as we go marching Rome is burning. I responded "good to see you Mister Premier" but he and his Sheriff friend were already gone and out of earshot. My wife and I turned off the news media during the pandemic and tuned into Dr. Deena Hinshaw, Jason Kenney, Health Minister Tyler Shandro, and later (Hon) Jason Copping. We did not get Covid19 until this summer of 2022, and by then devil pandemic was weakened and we got over it with ease. I'm thankful to the Alberta Government for getting me and my Alberta family through the worst of COVID-19. Thank you, Jason Kenney, and thank you to all the bus drivers who got our front-line workers and Albertans to work during the pandemic, they all deserve a bonus and raise, the women and men who kept us moving, thanks for the ride! Wear RED as we go marching, Rome is burning 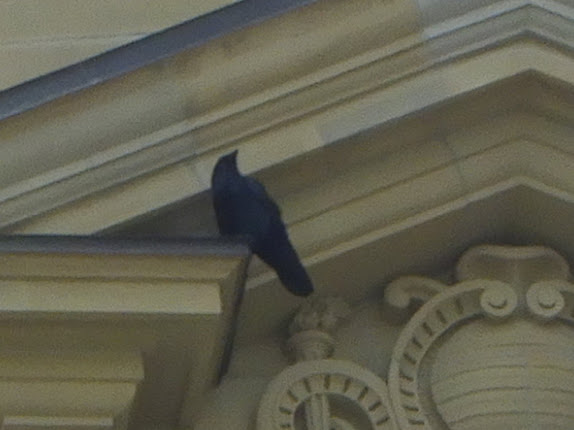 The crow above Alberta Legislature front steps, while a magpie close by watches the crow. According to the spiritual wisdom of the crow, growth can only happen when we go through periods of challenges. 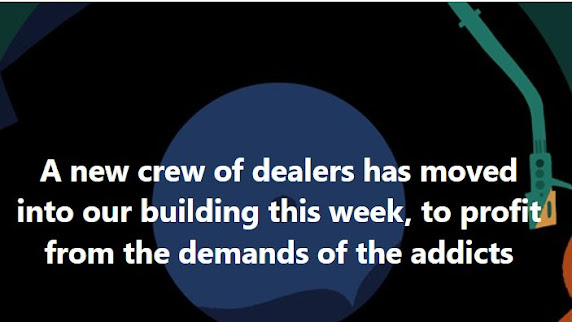 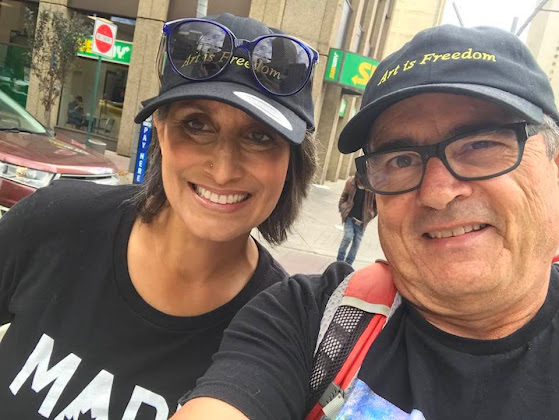 'I believe we should judge people on merit and not on the background.' Margaret Thatcher, Leader. I believe the measure of my being a man is not measured by the mistakes I made in a lifetime, but by how I embraced and owned my mistakes to better myself as a person. Doug Brinkman, Painter & Free Press, Democracy, Get in the Game! 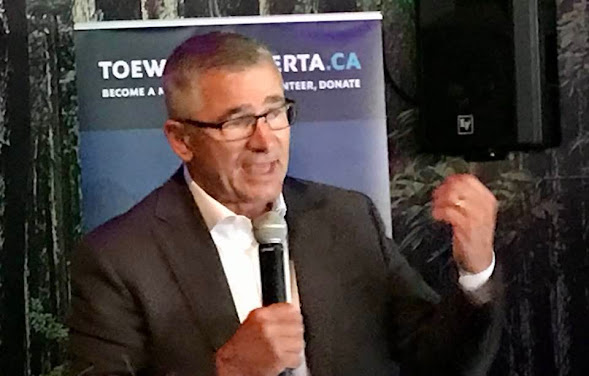 2022-09-24, Painter's notes, Democracy. My UCP ballot came in the mail today with my correct address. I voted Travis Toews #1 Leela Sharon Aheer #2 followed by Rajan Sawhney & Rebecca Schulz. I did not vote for the final 3 candidates, who attended the Alberta Prosperity Project and Rebel News had 4 security guards remove me (Citizen Free Press) from the front doors and public pedway outside the leadership forum. I was already there 2 hours from 3-5 PM interviewing guests out in the public/ not private pedway, including (Hon) MLA Pat Rehn for Lesser Slave Lake. Pat did not have any kind words to say about the current House Leader, Finance & Environmental Minister, the Honourable Jason Nixon, MLA for Rimbey-Rocky Mountain House-Sundre, Alberta. This UCP Party seems more divided now than it was before Premier Jason Kenney's Leadership was called into question. 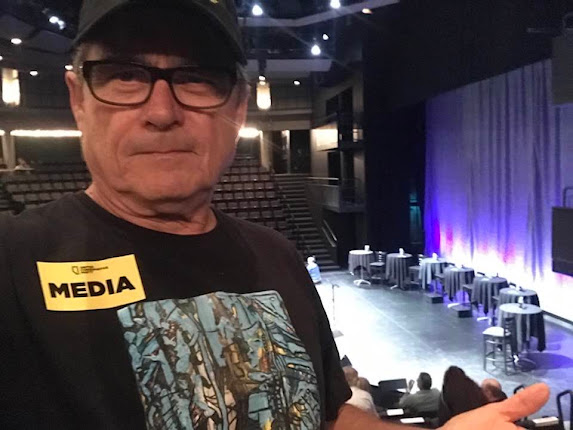 ...last Provincial election, through Social Media Twitter, I challenged members of the Press Gallery to divulge to the public what political party they associated with and supported. As a Citizen News Activist of 15 years, I first supported the NDP, later the Alberta Party, and currently UCP party. As a member of the NDP, I voted for David Eggen for the Leadership, quit the NDP and joined 2 parties, and voted for Rick Fraser as the leader of the Alberta Party, and Jason Kenney as a grassroots member of the United Conservative Party. I started participating in democracray as a taxpaying citizen of Canada in my 40s when I joined the National Party of Canada to help keep jobs in Canada for future generations. I became a civil information activist in 2007 and continue to practice my right to a free press as a Canadian. 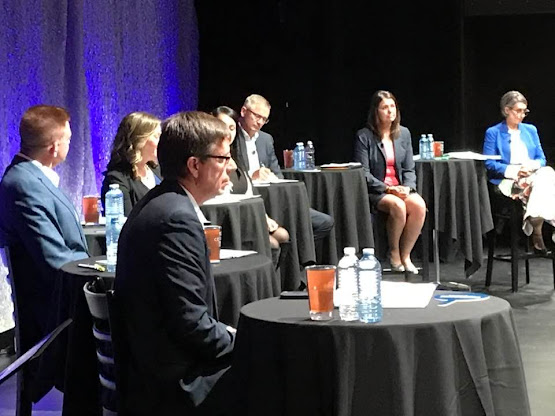 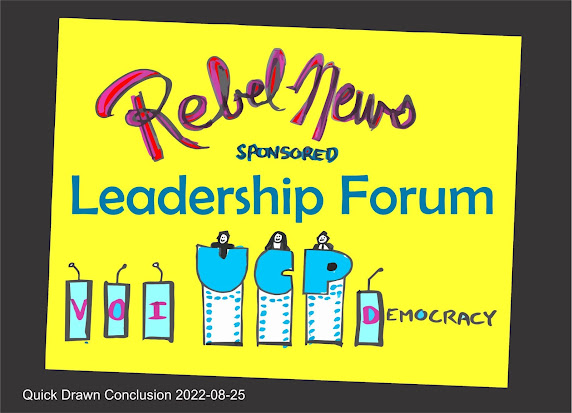 As a UCP member and citizen of a free press, I was ejected from the Edmonton Convention Center by Rebel News and 4 security guards from the Alberta Prosperity Project debate that included leadership candidates Danielle Smith, MLAs Todd Loewen and Brian Jean. 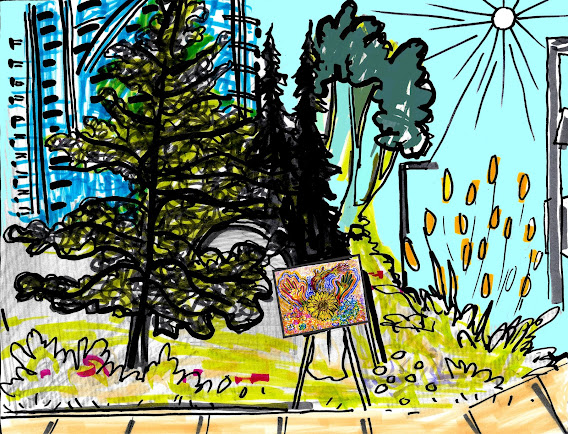 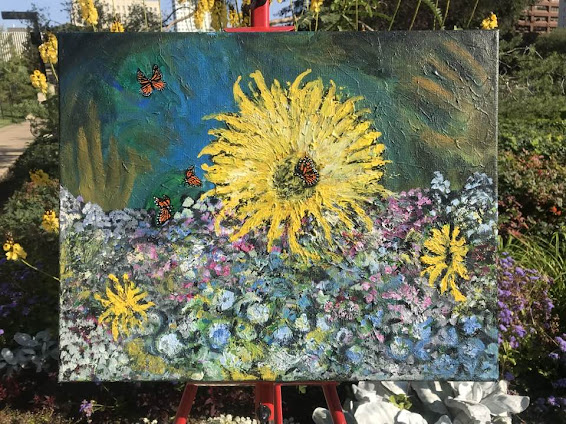 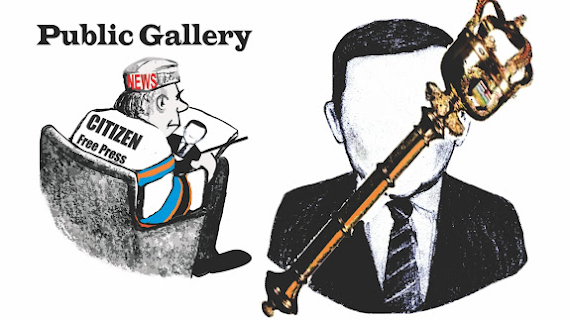 2022-09-16, Painter's notes updated: Yesterday the Alberta Government renamed the Federal Building, the Queen Elizabeth II building located adjacent to Violet King Henry plaza on the Alberta Legislature's 57 acres of grounds and Government buildings. It houses the offices and meeting rooms of the MLAs, and staff, and has a gallery, gift shop, theatre, and public washrooms on its main floor. Looking back on May 23, 2019, the former Sergeant at arms then Brian Hodgson, and I was both inside the Alberta Legislature assembly following the new Loyal Opposition Leader Jason Kenney's first speech to the Throne. The NDP Government MLAs vacated the assembly except for a single Minister, Oneil Carlier when it was the UCP leader's turn to address the Throne. Today I had the honour to sit next beside Mr. Hodgson, in the public gallery following Jason's lead to the Speaker with his final speech as Premier in the Legislature assembly followed by other Honourable members of the Government and Loyal opposition. At times the Honourable MLA representing Calgary-Lougheed choked back tears while reflecting on Queen Elizabeth II, her 70 years of service to Alberta, Canada and the Commonwealth. Jason shared a light-hearted story about the Queen only he would know. The Queen was meeting with her fans, and her husband the Duke said "we need to get going, we are already late for the plane." Jason overheard the Queen respond "I'm sure the plane will wait for me." Brian Hodgeson had the opportunity to meet Queen Elizabeth several times over his years of service as Sergeant at arms on behalf of the Queen for the Legislature under 6 governments. Today when it was time for the Loyal opposition leader Rachel Notley to speak on the Queen's death, Jason Kenney and all the UCP Government members all remained in the assembly and listened. 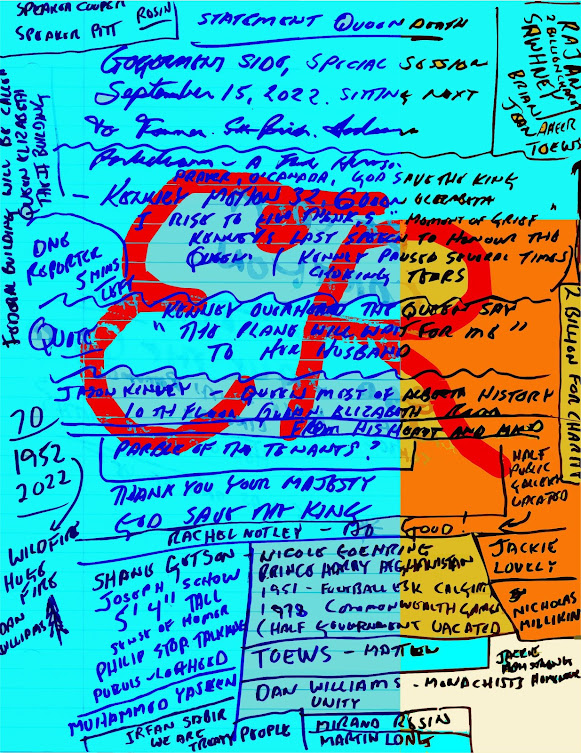 Painter's notes from the public, not empty press gallery listening to Jason Kenney's final speech as Premier of Alberta and other Honourable members responding to Queen Elizabeth's death. God Save the King. Former Sergeant at arms Brian Hodgson and I sat together in the public gallery, put aside our differences and shared friendly conversation before hearing statements by MLAs on Queen Elizabeth II, her passing. This assembly is truly an honourable place. 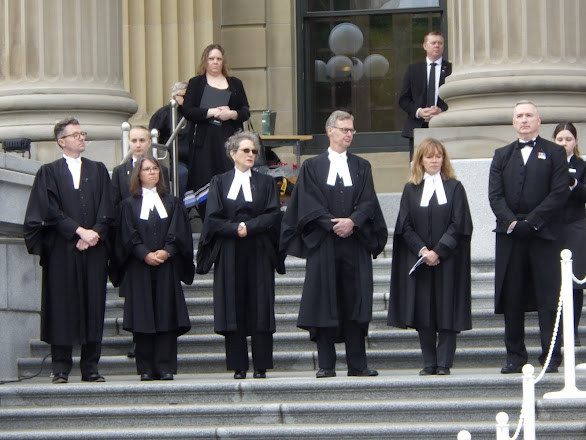 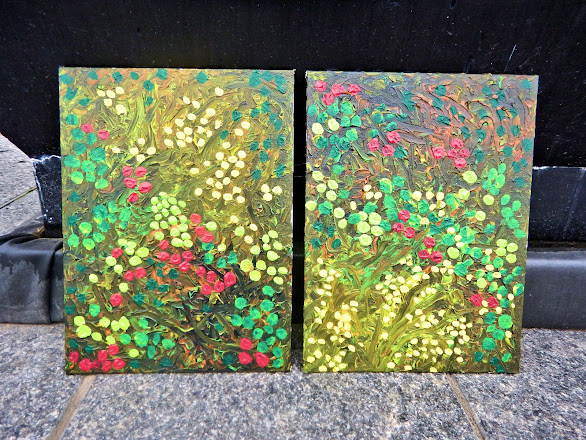 My gift of art and tobacco was offered and accepted by Elder Wilson Bearhead for his service.

to acknowledge King Charles III on the 15th of September, 2022Tobacco helped me with my questions relating to Urban Indigenous ways in Edmonton. This helped me better understand and improved my citizen news activism and art. We spent the whole morning together inside the Central downtown Jasper Avenue temporary main branch library sharing stories. I shared with Wilson how I use my art to help promote good in my community. I added additional thanks to Wilson Bearhead on the back lawns of the Alberta Legislature with my gift of art for his wisdom and service. 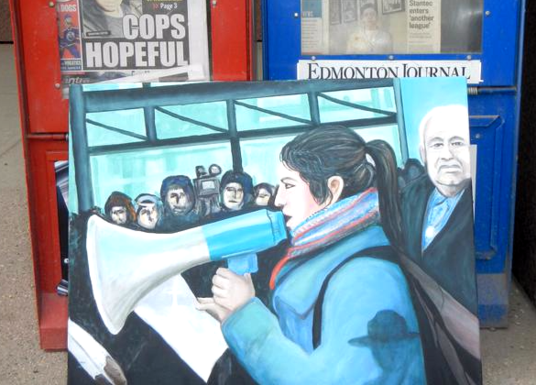 Democracy, Get In The Game, Citizen Free Press 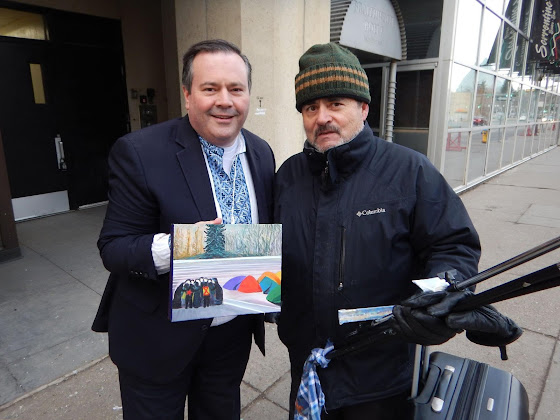 Naomi Rankin, leader of the Communist Party of Alberta once said during an interview at the Women's March outside the Alberta Legislature, I showed signs of mental illness for belonging to two political parties UCP and Alberta Party. Ironically Naomi instructs her membership to cast their votes not on her party, but on the NDP during election time in Alberta. Rankin also admitted during my interview that she and other political activists from the anti-pipeline protest nearby inside Sir Winston Churchill Square disrupted Ukraine, the Holodomor candlelight vigil held in front of Edmonton City Hall on the day Jason Kenney was in attendance. She claimed the Holodomor was faked. Jason Kenney and I later met that same day in November, 2016 after I had completed my painting, Water and Oil is Life, Nonviolence on location of the anti-pipeline protest, prayer camp in solidarity with Standing Rock, and he attending the Holodomor vigil. Jason told me of the disruption by political activists and asked if I thought they were the same activists attending the anti-pipeline protest... The Holodomor, also known as the Terror-Famine or the Great Famine, was a man-made famine in Soviet Ukraine from 1932 to 1933 that killed millions of Ukrainians. The Holodomor famine was part of the wider Soviet famine of 1932–1933 which affected the major grain-producing areas of the country. Wikipedia. Jason Kenney appreciated my anti-pipeline painting 'Water and Oil is Life, Nonviolence' so I gave it to him straight off my easel saying "what better man to have this painting than the man who appreciates it." thinking to myself, Jason Kenney might one day be Alberta's Premier. What an honour and an opportunity for me to have followed this great man's political career and watch the Premier and his colleagues work hard for Albertans from the public, not the empty press gallery inside the assembly of the Alberta Legislature. 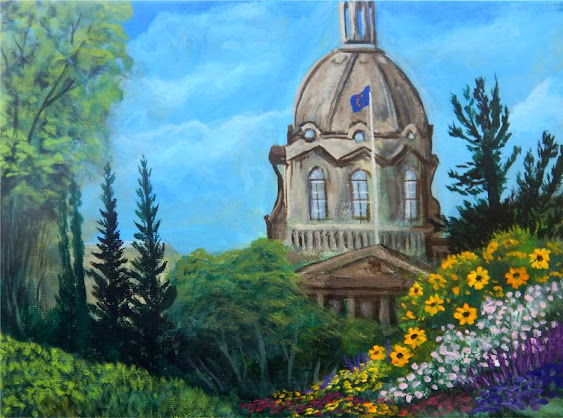 Looking back, painter's notes, On Guard for Thee: I've cooperated with the RCMP after learning from the last UCP leadership contest, a $20 cash donation was made in my name to a candidate I did not support. I voted for the Honourable Jason Kenney in the last leadership contest and I intend on voting for Travis Toews, followed by Leela Aheer in this 2022 leadership contest. I've provided bank records to the RCMP and I look forward to the results from their investigation. Until then I stand with and support Premier Jason Kenney, our UCP Alberta Government, NDP Loyal Opposition, free press, and Alberta's democracy. I also support the creation of an Provincial Police to replace the RCMP. 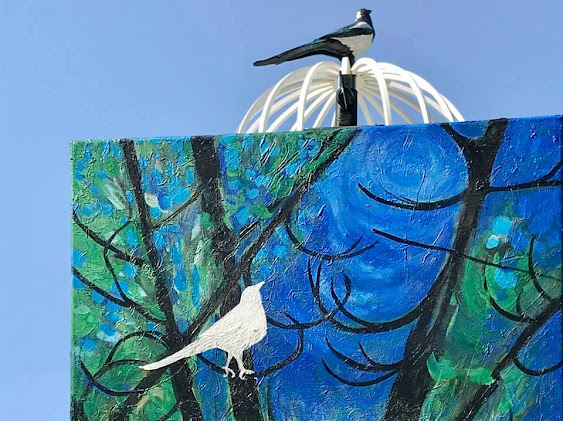 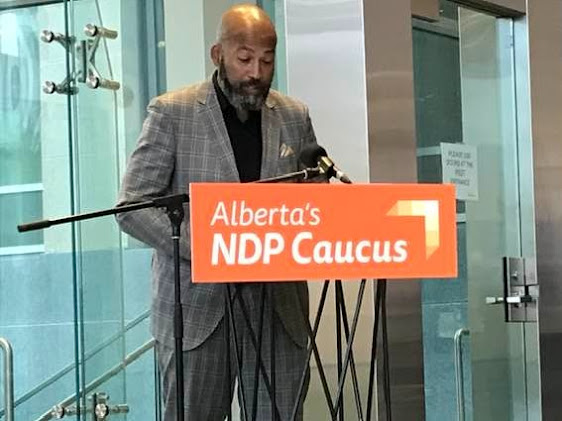 Alberta Legislature, inside the Queen Elizabeth II building, adjacent to Violet King Henry plaza, I listened to Loyal Opposition Health critic MLA David Shepherd's response to the ratified agreement between Alberta Government Health Minister Copping and 70% of Doctors of about 45 % who voted in the Province. Shepherd claims there are 37,000 surgery shortfalls in the Province and Minister Copping is looking to address the shortfalls with private healthcare. Only one reporter was present and asked questions relating to the UCP leadership. 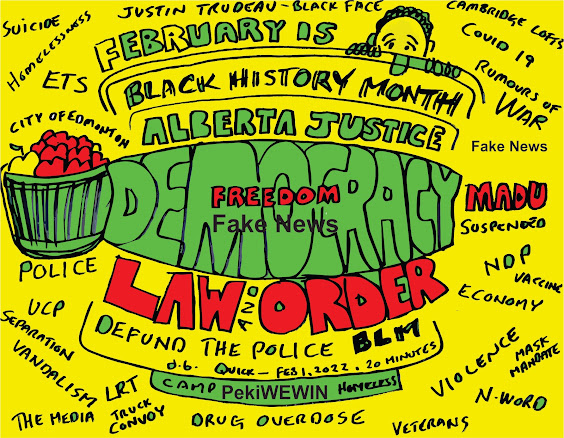 2022-10-01, Painter's notes, 'looking back through a glass darkly' my October theme is "Not All Treated Equal": I'm expecting more LRT, ETS, downtown Edmonton disorder, United Conservative Party division same as before but perhaps worse. NDP support I'm guessing will continue to wane, and another attempt by Edmonton City Hall councilors and Mayor Amarjeet Sohi to discredit and downsize the Edmonton Police Service, and stifle free speech by taxpaying citizens who don't support their socialist agendas. All flowers matter no more as we bed down for another cold Alberta winter and lots more snow angel heARTs I'm hoping. October surprise, I wonder if this is the month, the nuclear end time boys end our days? United we stand, divided we fall... all together now by the Beatles, and A Prayer for Unity by a woman. 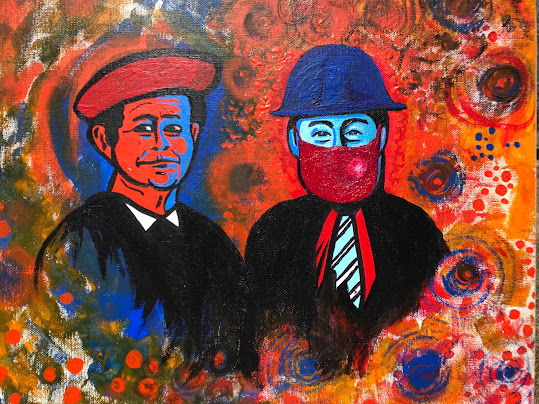 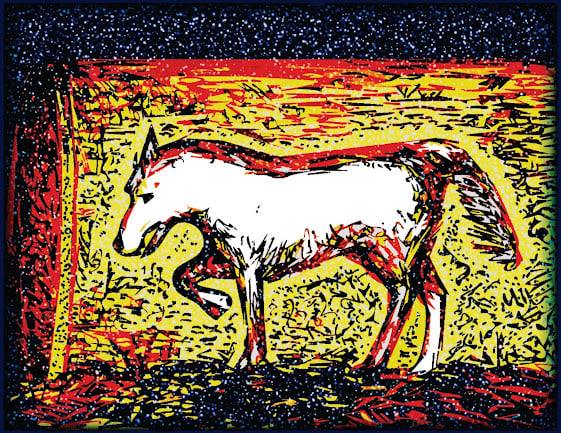 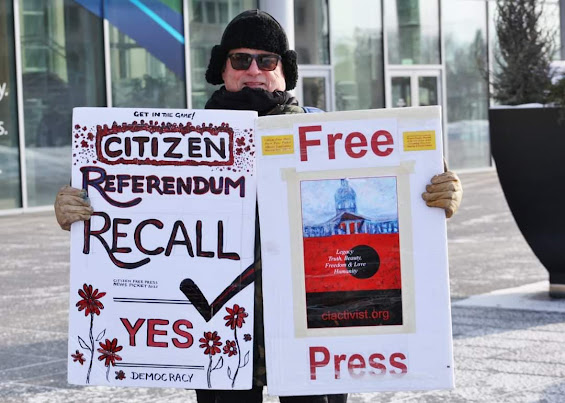 While on my citizen free press news picket line I met briefly with Jason Kenney coming down the steps outside his office of the Alberta Legislature to his waiting car with a team of Sheriffs. He said seeing my placard "hi Doug, we are going to pass that (the Recall Act) and I responded, "I'm going to hold you accountable to that." It was from these same steps I met Premier Jason Kenney with Alberta Sheriffs after the devastating hail storm that hit Calgary. I said "thank you, Jason Kenney, for responding so quickly to Calgarians." Jason responded shaking his head, "what next, a plague of locusts?" 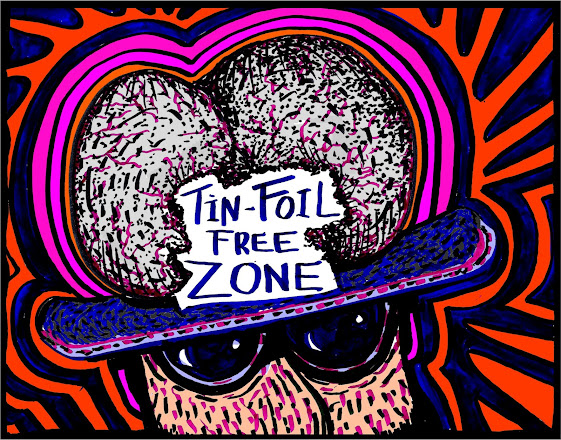 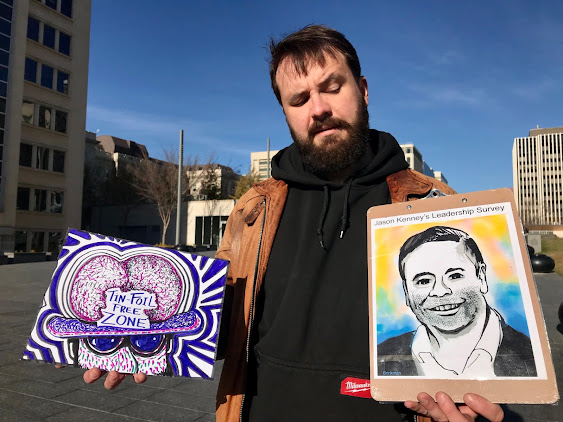 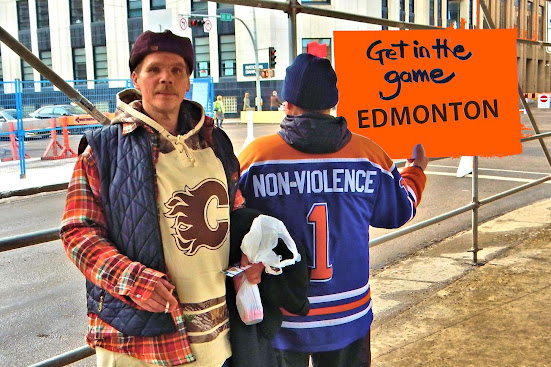 Citizen Free Press - Democracy, Get in the Game!
Posted by Doug Brinkman at 03:30

Forward in the Moment. Looking Back Wearing my HeART in September

Sept. 2022, 'Capo, my first golden retriever, so loved to swim she once jumped off a cliff to get into Lake Superior' Sara Paretsky,... 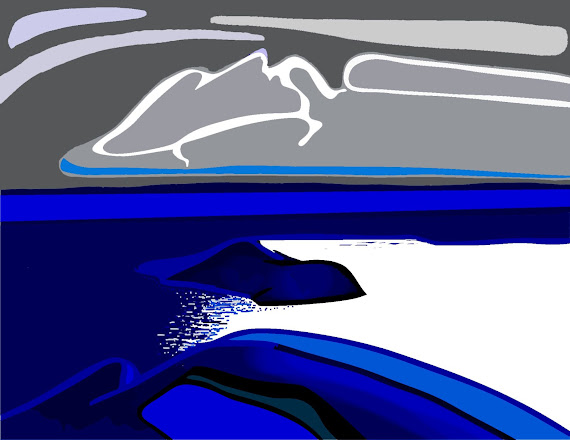