2016, Water and Oil is Life, non violence. Truth and Reconciliation 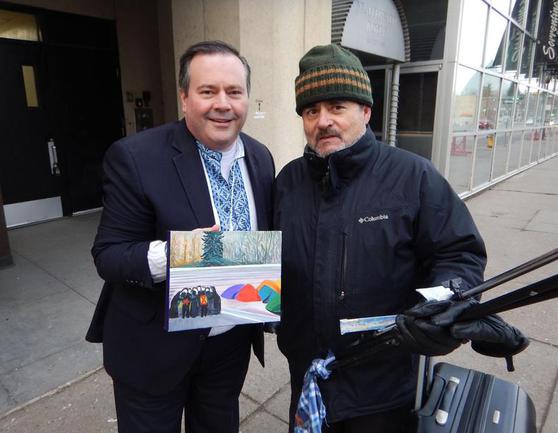 November 2016, Jason Kenney appreciated the story behind my painting, 2016, Water and Oil is Life-Nonviolece,  so I handed it to him straight off the easel without a second thought and said "what better man to have this painting, but a man who understands and appreciates its story" all the while thinking to myself this guy could become our next Premier of Alberta.

2021-09-29 News archives: 2016, Water and oil is life, non violence. (Gift to Jason Kenney) Painted inside Sir Winston Churchill Square in November, during a 3-day prayer camp in solidarity with Standing Rock/protest Keystone XL pipeline. Staged by political activists and presented to the public through CBC news. The leader of the Communist Party Alberta, Naomi Rankin baked us all cookies, including myself while I painted outside of the staging area. The City of Edmonton did not provide permits, peace & police stood down, and park trees’ branches were used to keep the campfire going. The circle was considered sacred by the leader of the prayer camp, Taz Bouchier and she asked that no photography be taken during ceremony. Only CBC cameras were allowed inside the ceremony circle to film smudging and the passing of the pipe ceremonies. I remained outside the circle during the entire 3 days where I filmed, sketched, and painted Water and Oil is Life Non-Violence. The painting shows activists gathered around a fire barrel with a tents off to the left. The wooded area in the background is where tree limbs and bows were hacked off to feed the fire barrel and keep activists warm. The protesters were made up of mostly white, political activists from various groups. Members of the industrial workers of the world union (IWW) were also in attendance all 3 days providing security, firewood and helped create protest signs. Weeks later, after publishing my story, the City of Edmonton, City Manager threatened me with police action for showing a painting in front of City Hall on New Years Eve of the Fort McMurray wildfire, 2016, The Great Escape. She claimed she knew who I was, I was not invited, and I had to leave and take my painting with me. This prompted a 32-day protest picket in front of City that ended with an apology from the City Manager March 10, 2017. Clearly Taz Bouchier's political connections with the CBC and The City of Edmonton was the reason I was threatened by a City Manger with police action. I have more evidence of this and will deal accordingly with the City of Edmonton and CBC if they ever overstep their boundaries and step on my rights and freedoms again... 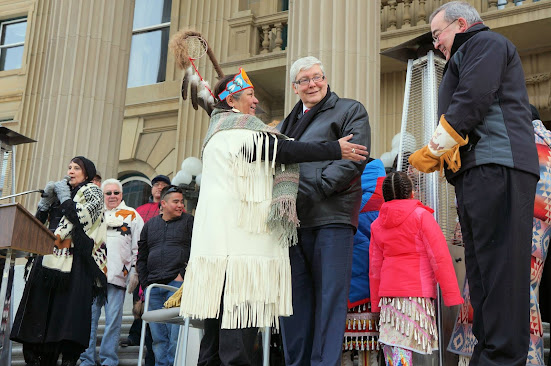 2014-03-30 Alberta Legislature: Truth and Reconciliation - Alberta National event ended with music, speeches and dance on the steps of the Alberta Legislature after marchers, marched from the Shaw Conference Center. Anti pipeline, Green party political activist Taz Bouchier is seen here in my photo embracing the Conservative Premier David Hancock, as nicities were exchanged between leaders on the Alberta Legislature steps that day. Citizen Free Press. 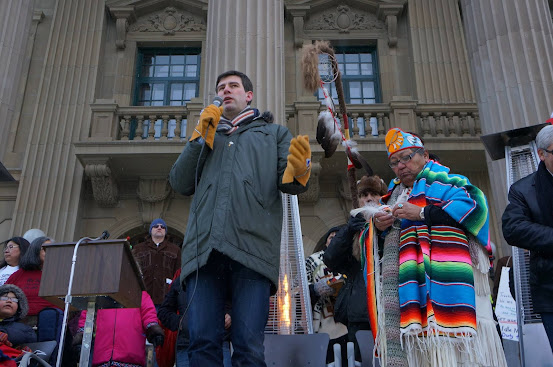 2021-10-01: From March 27-30, 2014 the historical Truth and Reconciliation (TRC) Alberta National Event took place in Edmonton. After the closing of the TRC, I had filmed much of the 3 day proceedings inside the Shaw Conference center that included speeches, interviews and outside following a march to the Alberta Legislature for a final rally on the steps. Controversy soon followed my news reporting when political activist Taz Bouchier called me up one evening and demanded I take down all my TRC related YouTube videos and re-publish them with her name credited for organizing the march to the Legislature. She complained that Mayor Don Iveson was getting too much credit with his role with the TRC and she had some political interests of her own to consider. I refused her editorial control over my news stories so Taz called for a complete ban on watching my YouTube through social media. Around November 2016 I again refused Ms Bouchier's request for editorial control of my news work as I reported on her staged 3-day prayer camp in solidarity with Keystone pipeline protest that she and other political activists staged for CBC news inside Sir Winston Churchill Square. In the fall of 2017 Taz Bouchier ran as a candidate for political office against Don Iveson for Mayor of Edmonton and lost. She later ran for the Green party in other elections. 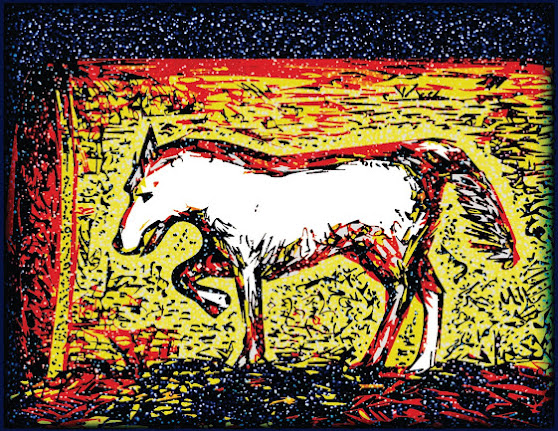 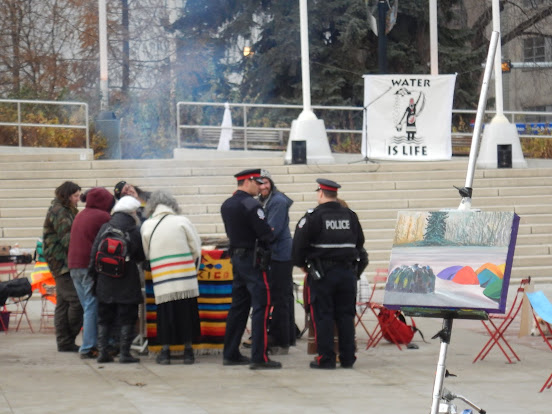 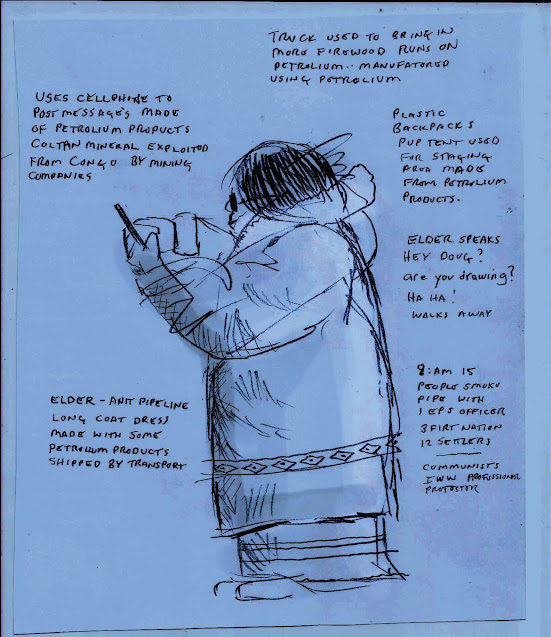 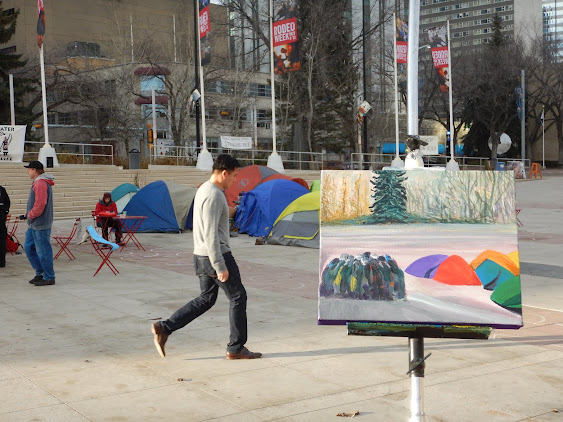 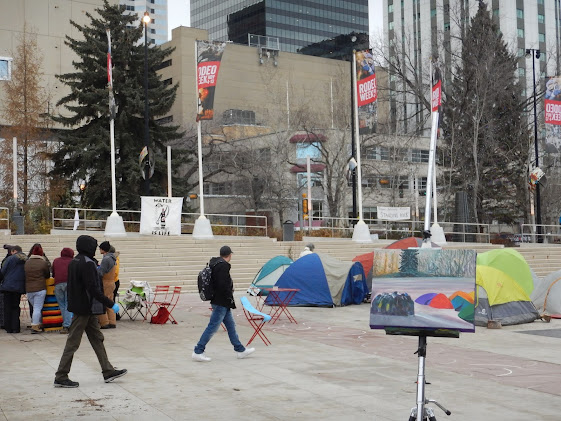 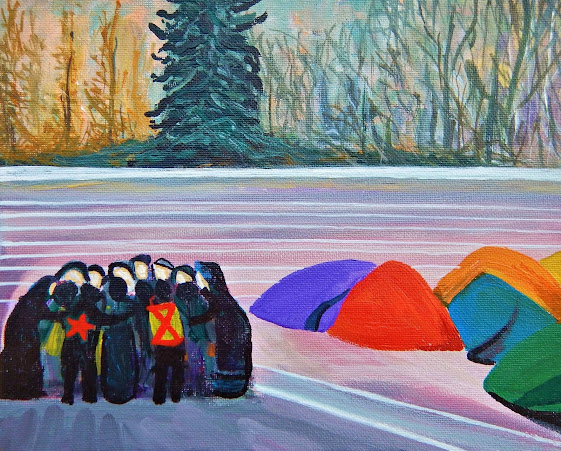 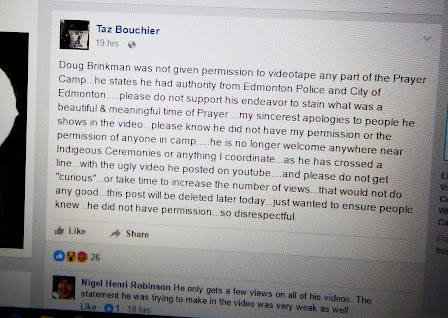 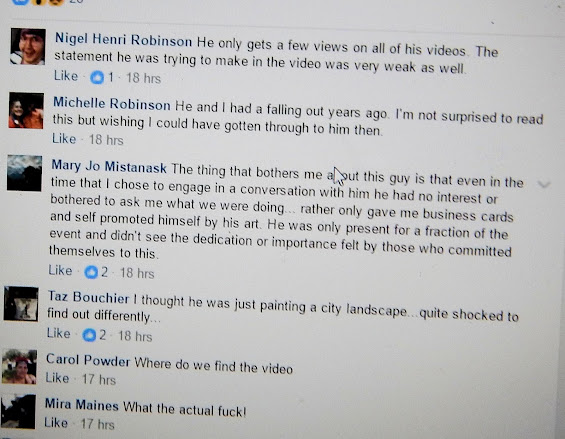 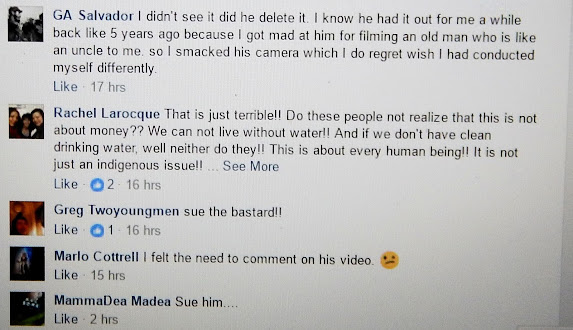 Posted by Doug Brinkman at 06:32 No comments: 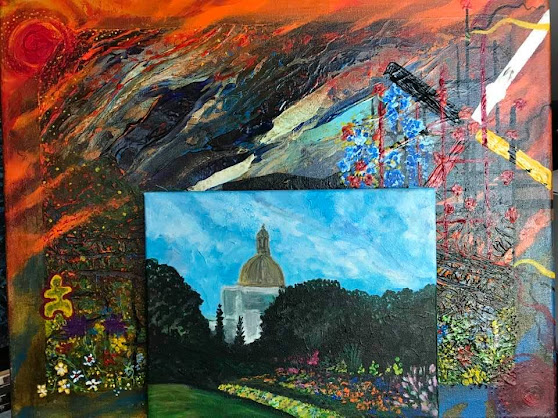